It’s pretty clear that the Summer of Love was a hippie haven—but the artists, musicians, spiritual connoisseurs and underage youth that flocked to San Francisco for the summer of 1967 didn’t actually like being called ‘hippies.’

While many that live in the Haight Ashbury district now embrace the term, it was originally coined to negatively imply that the massive group was a watered-down version of the hipsters. Instead, they called themselves freaks. I’m 27 years old so—obviously—the Summer of Love was before my time. But I used to call the City by the Bay my home. I’ve heard tales of The Grateful Dead and Janis Joplin. I’ve strolled through the Haight and spent time sifting through the shops. I’ve opted for electric blue nail polish over the vibrant, funky clothes in the windows; they were always a little too flashy for my taste. I’ve laid in the grass, listened to live music and smelled the marijuana in the air at Golden Gate Park.

But even though I’ve walked the streets that these self-professed freaks called home, I did not understand the movement—not really. In May, I visited the city to take a trip back in time. Fifty years have passed since that summer and San Francisco is celebrating with an array of events and activities, museum exhibits, special food and drink menus, hotel packages and more. While I wasn’t fortunate enough to visit each and every offering, here’s a peek at what I learned on a quick three-day trip.

The Summer of Love only lasted for a few months, but it’s important to examine a larger period of time to understand everything that was happening then. To learn about what led up to that summer, we stopped by the California Historical Society. Their current exhibit, “On the Road to the Summer of Love,” was curated by the Grateful Dead’s former publicist Dennis McNally—and we were lucky enough for him to lead us through it.

Each room in the exhibition was dedicated to a different group of people or events, expertly describing the years before the Summer of Love from the point-of-view of McNally, other industry experts and the people that experienced it firsthand. It starts with discussion of The Beats, a group of unique poets, painters and other artists that were active in the 1950s. The exhibit then moves through rooms covering avant garde art forms like mime, dance, improve comedy and, eventually, light shows as well as protests and civil rights demonstrations that set the political and artistic tones for the movement. Additional displays touch on the role that rock n roll played, the introduction of LSD as a catalyst and the concerts and rallies that took place prior to the summer. While there are also photographs and artwork from the Summer of Love and the Monterey Pop Festival toward the end of the exhibit, it ends with an image from Colorado, demonstrating the influence and spread of the movement to other regions in the U.S.

The Summer of Love

By learning about everything that led up to that famous summer, I had a better background with which to dive in to “The Summer of Love Experience: Art, Fashion, and Rock & Roll” at the de Young Museum. This special exhibit is everything you would expect a Summer of Love experience to be. It completely immerses you in the culture of the movement, incorporating music and lighting reminiscent of the time.

As you enter the gallery—expect to spend an hour or two here, if you’re thorough—you’ll pass an introduction with a series of inspiring quotes before strolling into the exhibit. The rooms are themed, just like those at the California Historical Society, and incorporate a little bit of what led up to that summer as well. After showcases learning about the Trips Festival in 1966, where many tried acid for the first time, and the Gathering of the Tribes in early 1967, the exhibition moves on to showcase everything from music and clothing to posters and drawings. Up close, you’ll examine flowing floral dresses, fringed jackets, corduroy bell-bottom jeans and ruffled button-up shirts. Over-sized knit tapestries cover the walls. Various designs in flickering colored lights distort your view as you wander rooms playing hits by the bands from the era. One room is covered, floor to ceiling, in poster after poster—vibrant neon colors depicting drug-induced designs and ads for parties and festivals. Yet another is set up as a giant light show, with beanbag chairs on the floor where we relaxed and listened to the music as the walls danced around us. It was everything you’d expect a Summer of Love exhibit to be, but it was packed full of information. Beyond the festivals, it discussed the lineups at local music venues, the acid tests and the social change that the counterculture fought for.

Place Yourself In It

The museums were great for showcasing imagery, music and details from the 1960s, but we ended the trip with a Wild SF Walking Tour in Haight Ashbury. A local musician named Wes led the tour, serving as one of five artists that guide visitors on these free tours (of which there are various themes) throughout the city. Because we were focused on the Summer of Love, our group opted for the Free Love tour—more than two hours of crisscrossing the hippie neighborhood to take in the sights and learn some history.

We started out in the panhandle of Golden Gate Park, where Wes quickly went over the history of the park and the development of San Francisco. As he set off toward the Haight, he lightly strummed a guitar, providing unique background music for the walk. As we ventured deeper into the neighborhood, he discussed the architecture of the Victorian houses and went over why the Haight made such a great destination for poor hippies and underage runaways in the 60s: cheap rent and like-minded youth. Throughout the tour, Wes went into incredible detail on the drug use in the area and the movements and festivals that locals held in the park.

He also described a group called The Diggers, who were the heart of the movement in the Haight. He told of their dedication to distributing free food to those that needed it, their special stores offering free clothes for hippies and their activist events, including a Death of Money parade down Haight Street. Another major part of the tour was visiting specific sites that were relevant in the 1960s. Aside from churches and stores that The Diggers occupied, and the famed free clinic, Wes took us by houses that once belonged to Janis Joplin, The Grateful Dead, Charles Manson and even the Hell’s Angels, who served as bodyguards at some of the summer’s concerts. While filling our minds with information on the artists and their neighbors, he played and sang along to songs by relevant artists as well—a touch that was indescribably different and truly made the tour. By the time the tour culminated at an over-sized mural of Carlos Santana, Wes had explained how the movement ended and why it couldn’t sustain itself, perfectly wrapping up the entire Summer of Love experience.

The Movement Lives On

With so many people flocking to San Francisco in ’67, there was an overabundance of drugs and a lack of housing. Because the city did little to help the homeless youth that traveled to the city to join the movement, it fell apart quickly within the next two years. But while I learned an incredible amount of information about the music, art and altered consciousness of that summer, what these exhibitions truly revealed were a need for individuality, self-expression and acceptance.

While travelers may wonder how the Summer of Love and the hippie counterculture are relevant in San Francisco today, a quote in the entrance to the de Young’s exhibition sums it up pretty perfectly: “Until all of us are free, none of us are free.” 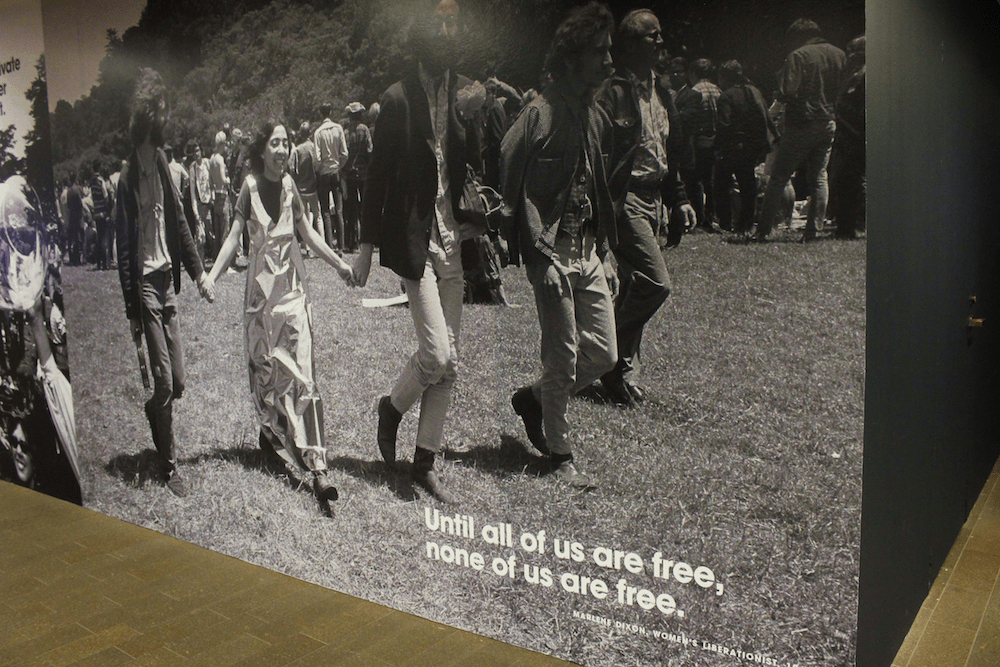 The movement, more than anything else, was about inclusion, acceptance and freedom—something that everyone could stand to learn more about.

The Summer of Love celebration will continue throughout the summer.