Boston With Boys: Fun Places for Kids From an Auntie’s Point of View

Boston With Boys: Fun Places for Kids From an Auntie’s Point of View When mapping out a play date in Boston with my two nephews, I had things scheduled in 30-minute increments. I decided to follow the KISS strategy: keep it simple. Avoid complicated logistics. Don’t go anywhere that required sitting still or keeping quiet or not touching anything. I was looking for high activity, low discipline. I’m an aunt after all—our day was all about fun!

Step 1: Put Your Watch Away*

I admit to being a little worried about keeping the boys entertained. The KISS itinerary involved hitting every park in town, including the anchor activity: skating at the Boston Common Frog Pond. But it was a 30-degree day in December, and I didn’t have a back-up plan. We started at Titus Sparrow Park in the South End. With a sandbox, two jungle gyms, a basketball court and enough room for tag at a full sprint, we killed 30 minutes without blinking. We could have stayed there indefinitely, but someone forgot their gloves: me.

Step 2: Get a Second Opinion

Acquiring gloves, generally boring for anyone, became a lot more fun by having the boys help me choose. Getting their opinions also kept them close to me, which was key. The Saturday before Christmas is no time to lose track of someone else’s kids in a Marshalls. And of course there was the negotiation for “what do we get for being good?” Answer: Whatever it is, you need to carry it.

Having time to warm up reminded us we were hungry. Looking out over Boylston Street from the Panera window, we guessed where the people rushing by were going and what exciting things they were off to do. It was fascinating to listen to what the boys noticed and how they interpreted what was going on around them. 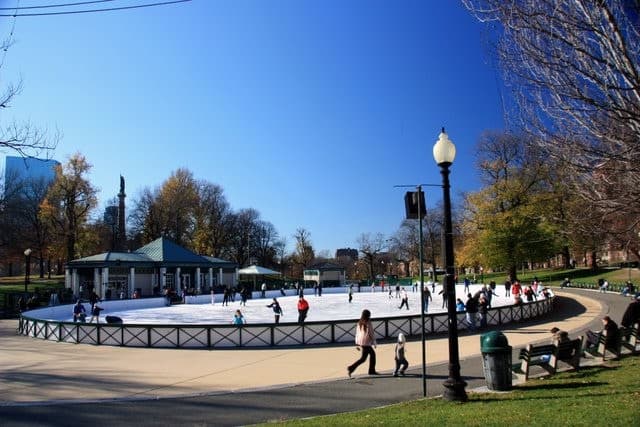 We made our way to the Frog Pond. I didn’t want to rush in case it was a disaster, and given the many promises I had already made to hold their hands, I don’t think the boys wanted to rush either. We walked the long path around the lake in the Public Garden. We discussed what ducks do in the winter (no idea), where the Swan Boats go (no idea) and the many reasons you don’t want to swim there. I made a mental note to re-read Make Way for Ducklings.

The Common wasn’t crowded, given the weather, but it wasn’t deserted. Buskers were busking, the balloon man was plying his trade, and the “all skate” was in full gear—it was definitely one of Boston’s fun places for kids. The line to enter the Frog Pond was maybe six deep and the price was right: children shorter than 58” are not charged admission and skate rentals are only $5. Which was good, because I figured by the time we spent the first 20 minutes getting laced up and the next 10 falling down, we’d all be ready for cocoa and lunch. But I didn’t know about Bobby the Skating Seal.

Step 4: Know When to Double Down in Boston

Ice skating with little ones involves variables that everyday caregivers would anticipate. For example, the differences in natural ability, motivation and independence between two children. Not to mention watching two small people going in opposite directions in a crowded, albeit contained, area. And PS, you’re on ice skates, too.

Two laps, four snowy mittens and 10 minutes later, we reached a fork in the road. We were a little cold, a little wet and only mildly entertained. But a handful of wee skaters were pushing a big, blue seal around on the ice. If we procured a seal, we would commit to staying longer. (Are you sure? Yes. We don’t have to if you’re not having fun? I am, I want to.) Ten dollars to rent the seal bought us a dozen more laps on the ice and saved our adventure. One child rode, the other skated behind and I pushed. Between Zamboni rest breaks and Bobby the Seal, everyone got turns, everyone got to rest and everyone loved it. It was perfect. To Know If You Go

Bring your own skates if you have them — The skate shop will sharpen them for a small fee, too.

No one skates well — “Children of all ages” will be clinging to the walls and falling down so beware of getting wiped out by a beginner and consider it half the fun.

Visit during lunch — Conveniently, our late morning snack meant we arrived at the rink at about noon. The admission line that was very short when we arrived was about 30 deep when we left.

Pack extra mittens — Falling on the ice leaves the little ones with snow-packed gloves that never dry. Save a dry pair for after your skating session. (Also, remember to bring your own.)

Don’t overthink it — Safety and common sense aside, the idea was to let the kids decide how long to play or climb or skate, taking the time to enjoy whatever we were doing for as long as we wanted to. Just focus on finding fun places for kids then give them freedom to explore.

*Check your watch — No one wants to spend a Saturday play date pegged to an agenda, but someone needs to be in charge of feedings. I’ve since been advised that an order of chicken dumplings from Panda Express at 4 o’clock doesn’t count as lunch.

Christel Shea has been a practicing aunt for 20 years, and never gets tired of play dates. As Editorial Director for TourMatters, she brings a traveler’s eye to all adventures, even in her own back yard.